The 2017 Asian Indoor and Martial Arts Games will be held in Ashgabat from 17 to 27 September 2017. This Games attract delegations from Asia and Oceania to participate across 21 sports.

This is a historic moment for the country, as Ashgabat 2017 will be the first major multi-sport event to be hosted in Turkmenistan. The vision after these games will be for the city of Ashgabat and the wider country to host future major sporting events at an international level.

The Ashgabat 2017 logo is made up of several different elements:

The akhal-teke horse is a national symbol of Turkmenistan. These horses are renowned for
their speed, endurance and intelligence. The horse represents Health.

The crescent Moon is a recognized symbol shown on the Turkmenistan national flag. The Moon
represents Inspiration.

The star is the symbol of the Olympic Council of Asia, which represents welcoming Asian countries
to Turkmenistan. The star represents Friendship.

Together the elements of the logos and the colours come together to represent Health, Inspiration and Friendship within Turkmenistan, and the circular shape reflects unity and sharing these values with the world. 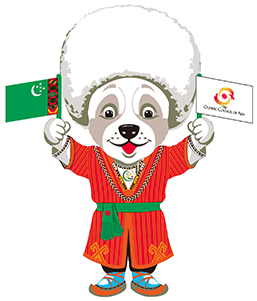 The Ashgabat 2017 Mascot is called Wepaly – meaning Loyal Friend in Turkmen. He is an Alabai, a traditional Turkmen dog which is renowned as a beautiful and courageous animal that for many centuries has helped Turkmen shepherds to safeguard flocks of cattle in heavy conditions in the sandy desert. Today the Alabai is treasured by the Turkmen people not only as a courageous protector, but also as a loyal friend. Wepaly wears traditional ceremonial dress and a white telpek fur hat while waving the State Flag of Turkmenistan and the symbol of the Olympic Council of Asia.